10 Things to Avoid in Morocco 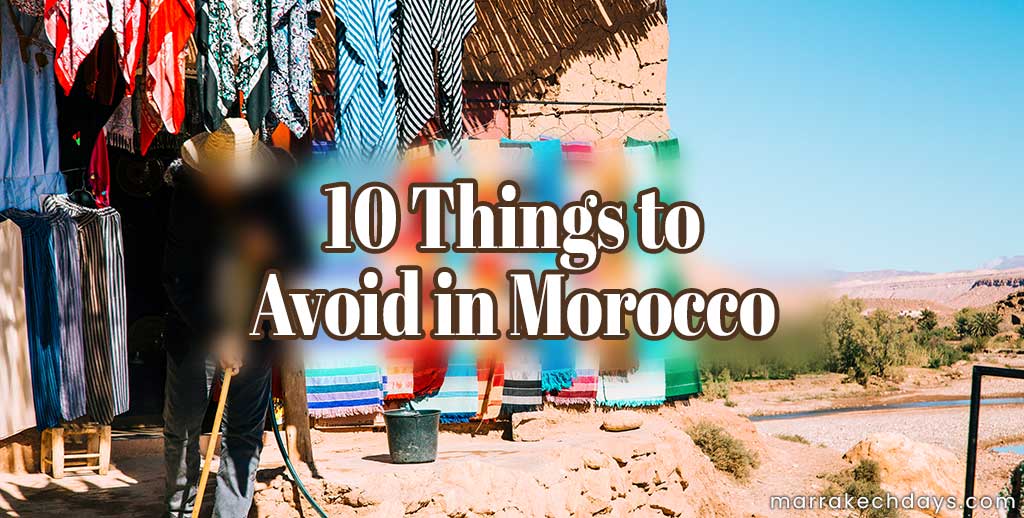 Like any certain cultural group, Moroccans have their rules of conduct to follow and taboos to avoid. If you don’t want to offend Moroccans, especially the authorities, there are certain things you might want to avoid.

While Morocco is relatively more liberal than many other countries in the region, one has to avoid making mistakes that might make the locals outraged or offended by any means. Certain topics related to creed and sex tend to have an extra notch of controversy in Morocco. So, It’s better to reserve certain opinions for oneself.

Other than topics that you probably don’t want to delve into, things to avoid in Morocco include simple rules of conduct to follow if you want to have a great vacation in Morocco.

So, let’s get into our list of the Top 10 Things To Avoid in Morocco.

Morocco certainly has no shortage of gender and comparative religion awareness. However, you don’t usually find people casually discussing such topics and feeling comfortable.

There are mainly three categories of taboo subjects that you often find regular Moroccans don’t want to talk about: Religion, Sex, and the Monarchy.

The status quo religion of Morocco is Sunni Islam. Most Moroccans don’t go beyond what’s prescribed by the sunna of Prophet Muhammed (his rules of conduct) and the Holy Quran. A minority of Moroccans follow a more Sufi approach to Islam, but these people are only a few and far between.

So, for a regular Moroccan, anything you say that tries to discredit the Prophet Muhammed or the Quran is practically a sin against Islam and Muslims.

The government also doesn’t appreciate any sort of religious discourse that’s against Islam or tries to discredit the faith. While you have the complete freedom to practice any religion you want in Morocco, it’s a crime to try to convert a Muslim in Morocco or promote your religion. It’s not uncommon for the authorities not to allow you to have an Arabic copy of the Holy Bible or any canonical text of major world religion.

Anything that’s not heterosexual is taboo for most Moroccans. Sex is often a subject that many Moroccans like to talk about, especially young males. You can talk about heterosexual relations and even have fun doing so. Moroccans have tons of jokes about the soldier’s wife who cheats on him when he leaves home that often get graphic.

However, the moment you start talking about “irregular” sex in front of Moroccans, you’re risking making the conversation unbearable. Topics like incest, gay marriage, pedophilia, sexual transformation, and all sorts of stuff that we can’t talk about here are often frowned upon in Morocco.

So, don’t expect Moroccans to not address you with your preferred pronoun unless it’s a close friend. If you subscribe to any community based on things you do in bed that are not regular intercourse, you probably would want to keep that to yourself and your friends.

The Monarchy is a No-touch Zone

A popular belief among Moroccans is that the monarchy is good, and anything wrong that happens in politics is to be blamed on the elected government. Bashing the Prime Minister is the norm in Morocco. However, no one dares to say anything negative about the monarchy.

Generally speaking, the Moroccan King Mohammed VI is very loved among his people. The King goes to great lengths to make the situation better for everyone. The ones to be blamed for social and economic issues in the country are the elected government.

2. Avoid Dressing Up in Provocative Clothes in Morocco

While Moroccans usually dress up in Westernized outfits, there are certain limits to what you can wear in public, especially if you’re a female or a member of the LGBTQ community.

As a woman, the problem you’ll encounter when wearing revealing clothes is going to be stares, a lot of them. You’re also very likely to receive comments and advances that you might deem as sexual harassment. While most Moroccan males are relatively harmless, the extra attention you receive when you wear “sexy” clothes might be too much annoyance to you.

As for crossdressers and drag queens, it’s highly advised to avoid wearing the type of clothes you like wearing in Morocco. Moroccans are not homophobic or transphobic per se, it’s just that that type of culture is foreign. Here’s a fun fact about Morocco; the only place where drag queens used to be is carnivals, where they dance as entertainment for a gambling game. Once the game is over, the man dresses in regular clothes, and you can’t tell if he’s the same person. 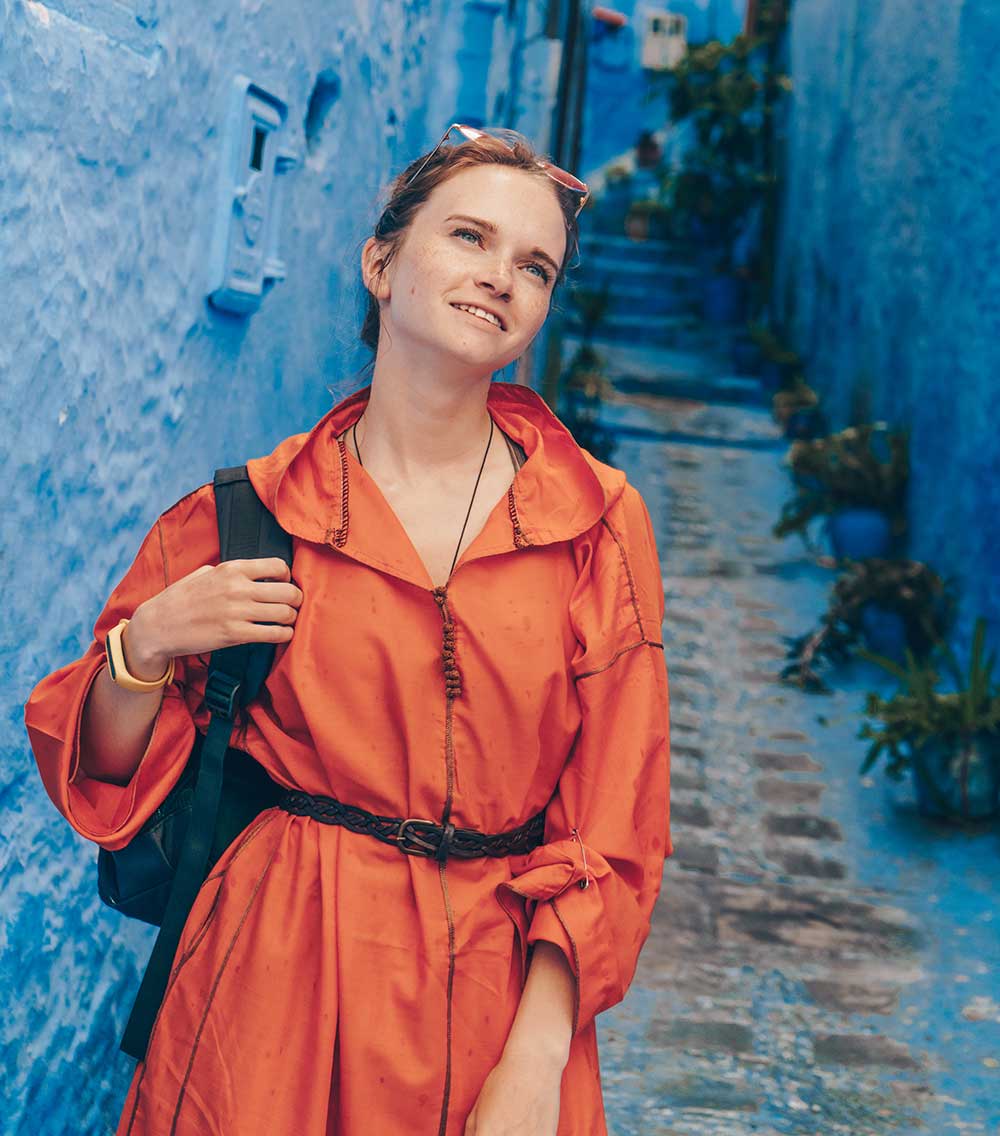 While Moroccans usually dress up in Westernized outfits, there are certain limits to what you can wear in public, especially if you’re a female or a member of the LGBTQ community.

As a woman, the problem you’ll encounter when wearing revealing clothes is going to be stares, a lot of them. You’re also very likely to receive comments and advances that you might deem as sexual harassment. While most Moroccan males are relatively harmless, the extra attention you receive when you wear “sexy” clothes might be too much annoyance to you.

As for crossdressers and drag queens, it’s highly advised to avoid wearing the type of clothes you like wearing in Morocco. Moroccans are not homophobic or transphobic per se, it’s just that that type of culture is foreign. Here’s a fun fact about Morocco; the only place where drag queens used to be is carnivals, where they dance as entertainment for a gambling game. Once the game is over, the man dresses in regular clothes, and you can’t tell if he’s the same person.

While the authorities won’t follow you around to prevent you from having sex with your partner if you’re not married, it’s technically not allowed according to Moroccan law 409. Many Moroccans think this law is outdated and should be dispensed with, but it’s still a relatively conservative country that only allows heterosexual relations between married couples.

5. Avoid Taking Pictures of Moroccans Without Asking for Permission

To play it safe, always avoid taking pictures of strangers on the street without asking them. Also, if you, by any chance, are in a public square (such as Djamaa ElFna Square) where street performers and artists dwell, you shouldn’t only ask for permission before taking a picture or a video.

You should also consider paying them a respectable amount of money for that picture or video. Those people make money that way. And in Morocco, it’s almost a sin to block someone’s source of livelihood from flowing even with such an innocent act. It’s like filming a whole Metallica show and publishing it on YouTube; you’re very likely to get a copyright strike because you don’t have the rights to film or publish their material.

Check our tours to discover the beauty of morocco

6. Avoid Going Out Late in Morocco

If you’re going out at a late night, especially as a young female who doesn’t know anything about dismantling knives and kicking two guys at once, you’re practically calling for a horror night. While Morocco is relatively safer than many countries like the U.S., going out at night, isn’t exactly the best thing to do if you want to keep yourself and your stuff safe at a safe distance from all the dangerous night dwellers.

There are all sorts of junkies, drunks, criminals, beggars, and crazy people who become active during the night. The least dangerous thing that could happen to you if you have a faint heart is someone scaring the life out of you.

So, stay at your accommodation and order the stuff you need to arrive at where you’re residing. Only go out when there are enough regular folks walking by.

7. Avoid Eating During the Day when It’s Ramadan

As you might already know, Ramadan is the holy is an Islamic holy month during which Moroccans (and all Muslims) abstain from eating, drinking, smoking, and sexual activities from dusk to dawn. So, you should avoid doing any of those activities during the day in a public place when it’s Ramadan to not offend anyone.

Also, fasting is very good for your health, so you might want to join in with the Muslims for a couple of days. Ramadan is actually a fun month that transforms the whole society. People become more active at night, and the food is just amazing during that holy month. The breakfast table of a typical family during Ramadan displays all the best choices Moroccan cuisine has to offer.

Drinking alcohol outdoors is illegal in Morocco. If you’re not drinking alcohol within the confines of your accommodation or in a bar, take that bottle of yours to a private place where you can enjoy it, even if it’s just a single can of light beer.

Many shop owners in Morocco wait for that person who’ll pay whatever they ask without negotiating. That’s why they might set the prices very high. If you’re shopping in the medina of a Moroccan city, always negotiate for the price of what you’re getting. Oftentimes, you’ll get the seller to subtract up to 30% if the original price is indeed very inflated. In the right context, haggling is never seen as a negative thing in Morocco.

If you’re an American who often visits pawnshops, you probably have a knack for getting the best deal. So, feel free to exercise your skills in Morocco if you’re shopping for a rug or some kind of artifact from a bazaar.

10. Don’t Limit Your Stay to Only Marrakech or Fez

While Marrakech and Fez are two of the major highlights of Morocco, they’re not the only ones. You can certainly have a lot of fun exploring these two great cities. However, you’ll be missing out on a lot of good places in Morocco if you just stay in one city.

Perhaps one of the best ways to explore Morocco is to book with a professional touring agency with itineraries that include all the interesting spots in Morocco. If you’re interested in joining us on a trip across the best places in Morocco, make sure to check out our itineraries.

You can also rent a car and enjoy touring Morocco on your own.

So, there you have it. This was our list of the things o avoid in Morocco. I hope you enjoyed learning some things about Moroccan culture in our article. Check out our blog for more information and posts about Morocco.

Contact us if you need anything related to vacation in Morocco. We’re always happy to answer! Have a nice day!