Discover the Imperial Cities from the purple of North Tangier

Overview of your tour trip from the purple of north Tangier:

You will discover the historical and powerful cities in 6 days tour starting from the purple of north Tangier. This journey allows you to visit the top Moroccan cities. Our tour starts from Tangier to the blue-city Chefchaouen or the blue ship, passing by the Ruins Volubilis (Roman heritage), and crossing over the oldest city Fes. Continuing to the capital city, Rabat, then we will go to the largest city, Casablanca, at the end of our trip we will arrive to the Red City Marrakech.

Historical & Modern Cities in 6 Days from the purple of north Tangier:

Arrival and meeting at the purple of north Tangier and drive to Chefchaouen, the blue town, a historical private military barrack to attack the Portuguese conquest on the north coast. The city was defending against foreigners who maybe have the attention to settled or to conquer. By the arrival of the Spanish forces in north and have control most of it, several European were visited the city after it was closed in their face. You will be in this wonderful city around the afternoon so, you will have time to walk around its blue streets. The atmosphere here is really great, we will have the night in the latter.

In the morning we will drive to the roman city Volubilis, it takes about 2 hours to get there, but the landscape along the way bewitching the eyes. Volubilis is located on Zerhoun’s mountains. The place was inhabited since the ancient age and several empires have rolled over it in different times but the important ones are Carthaginians and the Roman. In this site you will know about the historical heritage of the Roman which was ruling several cities and Volubilis was the capital at that time. You will see the house of Orpheus ,Decumanus Maximus and Triumphal Arch, the house of Dinysus ,the house of Dionysus besides a Roman and Berber writings. Near by the Roman city, we will reach Meknes, the Ismaili capital. Around the afternoon we will drive to Fes. We will stay at the hotel or riad in the medina.

We have breakfast, you have the full day to visit the main tourism places in the city with a local official tour guide. You will have a stroll around the Medina with its traditional souks (you will see the products of craftsmen in preparation), then we stop at the gateway of the Royal Palace, a visit to the oldest university in the world Qarouine Mosque founded by Fatima Elfihria. During our tour we will visit also the mausoleum of the city founder “Moulay Idriss II”. Fez known with its traditional restaurants that are serving delicious and different recipes so, we will choose one for lunch. Later, we will continue our visits and that time to the Nejjarine Fountain, the old Harem Garden and also, the Batha Museum. By the evening we will get back to our residence.

Between our imperial cities that must be visited along our tour trip, the Royal and capital of the Moroccan Kingdom, Raba. It will be interested to visit such prestigious city as the latter. The sightseeing includes: the ancient symmetry of Chellah and the Roman and Islamic ruins. Then, we pass over the gate of the Kasbah des Oudaias  to reach the heart of Rabat’s old city. Taking the chance to visit the Andalusian Gardens enjoying the its great architecture. The Hassan Tower, the famous minaret of the incomplete mosque which was built by the caliph Abu Yusuf Yaqub al-Mansur during Almohad Caliphate. And also, the Mausoleums of Mohamed V and his son Hassan II, all these sites will be visited to make your journey richer. Night and dinner at the site. In the next day, we will continue our tour that has started from the purple of north Tangier.

Our next imperial city will be Casablanca, about 86km from Rabat, via the coastal road. Economics’ capital of Morocco, with the largest population of 3,36 million according to 2014 statistics but now it has a population above the Mauritania country. It’s where Hassan II Mosque located. The most famous mosque along North Africa, built on the marginal of Atlantic Ocean, and has a 690 feet (210 m) minaret—the highest one in Morocco and the tallest minaret along Africa. It holds more than 150,000 worshipers in total and 25,000 prayers inside. What might be known is that mosques can entered only by Muslims! But Hassan II Mosque allow non-Muslims also to enter inside. You will be in love with its design and architecture. Then, we will drive to Marrakech. Residence here.

You have the full day to visit the sightseeing of Marrakech with a professional local guide. The journey will reach the important sites of Marrakech including: Medrassa Ben Youssef, the college get back to the period between 1106-1142, it’s an Islamic college for religious lessons, architected in a Morich design, then you will visit The Bahia Palace, a historical preserved heritage and one of the attractive tourism sites in the Red city Marrakech, was built for Ahmed Ben Moussa, grand vizier of Sultan Moulay Abdelaziz. Also between the programed tour places, we found Jemaa El Fna, the city’s main square and the heart of the city. It’s the open and dynamic place to the Marrakech people (lot of activities are practiced there). We will have Tangia for lunch (a recipe special of the local inhabitants). In the afternoon you will visit the well-known Majorelle garden and a stroll along interesting handicrafts souks (traditional markets for handicrafts products). Our tour that has started from the purple of north Tangier will end in Marrakech. 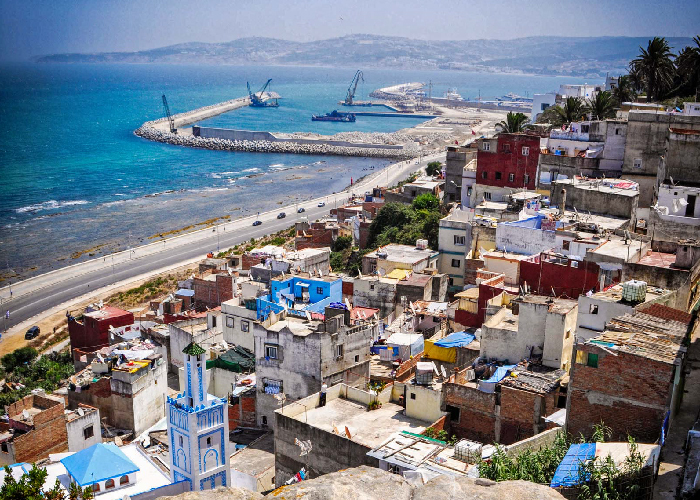 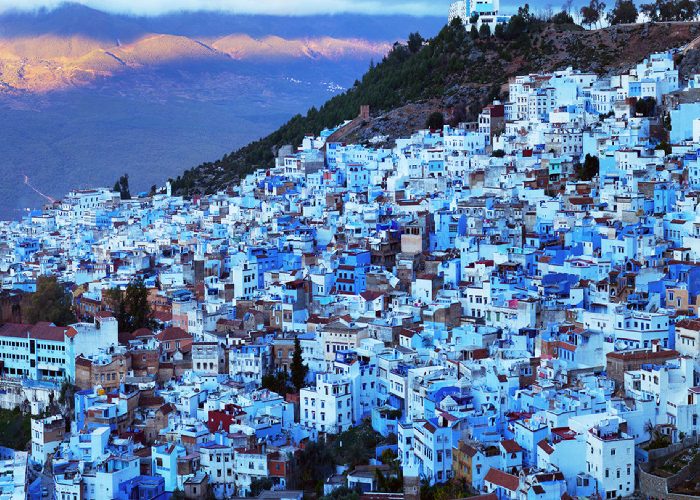 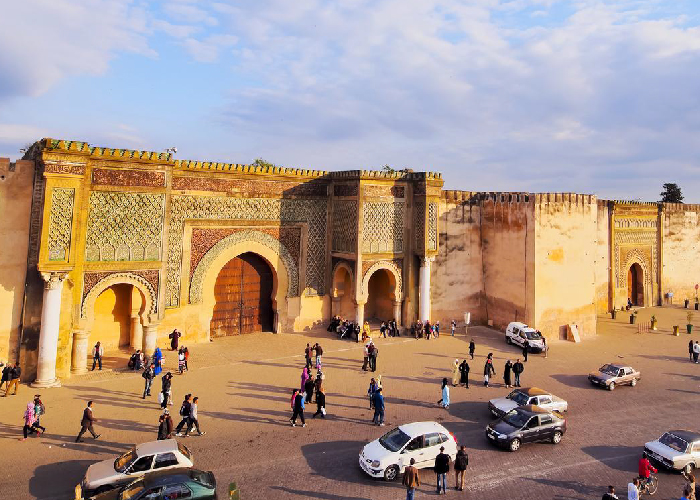 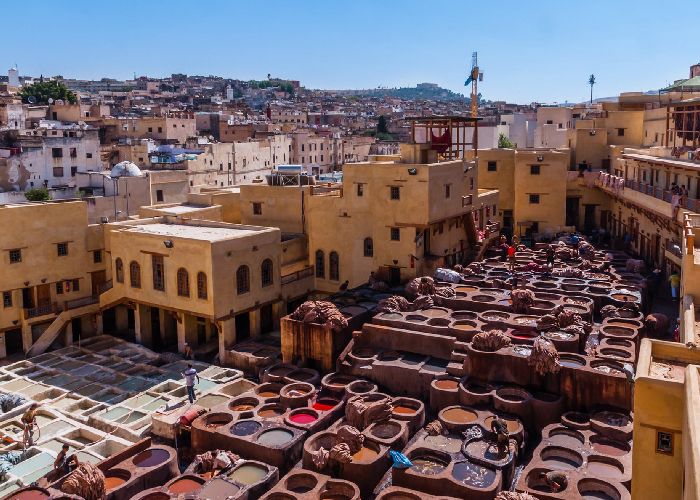 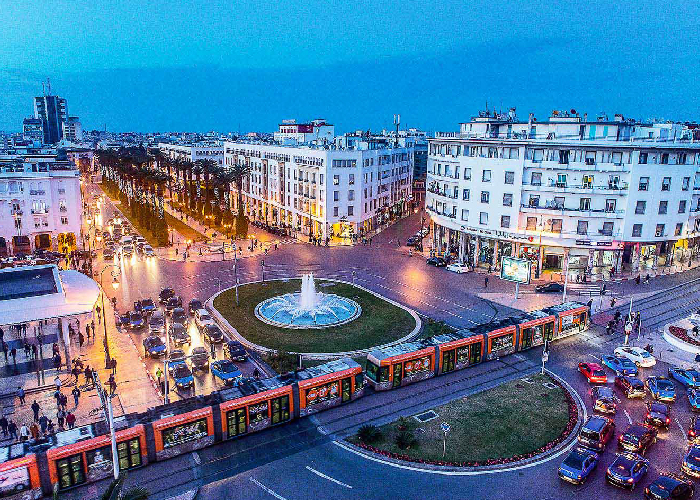 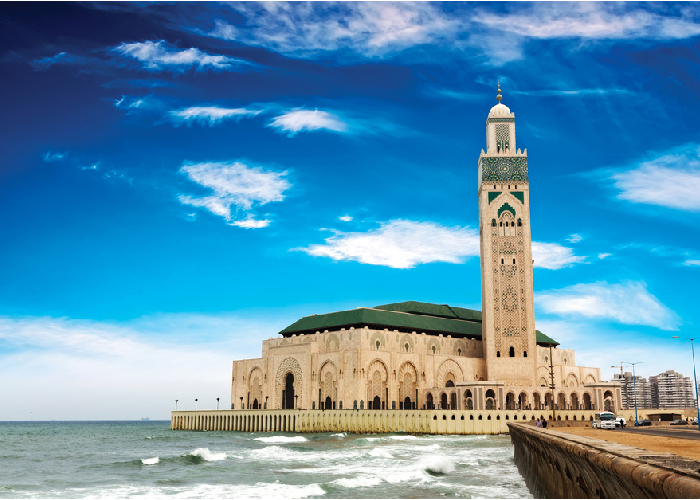 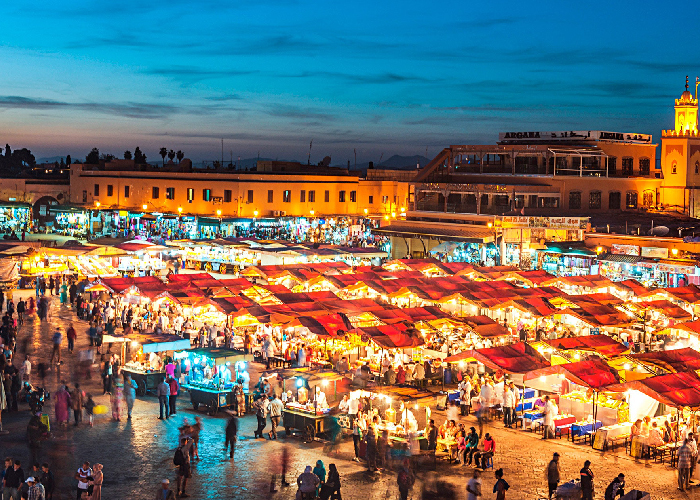